Baylors Women's Basketball Championship win in question; will it stand 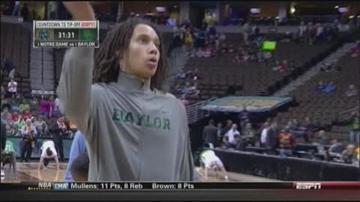 NOTRE DAME, Ind. – Less than a week after the Lady Bear’s of Baylor University defeated the women’s squad from Notre Dame in the final game of this year’s College Basketball National Championship, rumblings of NCAA penalties being handed down circulated Monday.

Baylor’s recruiting practices first came across the NCAA’s radar back in 2008, when Brittany Griner and her father were interviewed by NCAA staff.

Eventually, the NCAA requested phone records from the university and found the Men’s and Women’s Basketball programs had violated NCAA recruitment regulations.

Some of the violations included 738 text messages and 528 phone calls made by program staffers over a 2.5 year period; all out of line with recruitment regulations.

Head Coach for the Women’s Basketball team, Kim Mulkey is said to have sat next to Griner’s father at AAU games and talked about Griner’s future at Baylor.

Baylor University has already began the punishment process by taking away two scholarships for the women’s team; not allowing assistant coach Damion McKinney to make any phone calls to recruits since January 1, 2012; and prohibiting Mulkey from recruiting off-campus from July 1 – July 31.

But the NCAA could come down harder on the school.

The recruiting violations, while a the majority of them came from the basketball program, extended beyond the hardwood.

From January to July 2011, the NCAA found 405 recruiting violations from nine different sports at the university.

What’s in question now is, will the NCAA hand out stiffer penalties.

It would not be the first time the NCAA has stripped a team of their appearances at the national tournament.

The Texas Tech Red Raiders and the Memphis Tigers are just two teams who have had their appearances stripped for NCAA violations in recent decades.