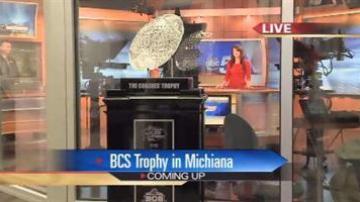 SOUTH BEND, Ind. -- It's one of the most coveted trophies in college sports and it was in the ABC57 studio Wednesday. If you want to see the BCS Coaches’ Trophy, you get your chance on Thursday.

The Coaches' Trophy is visiting Michiana and made a stop at ABC 57’s studios.

The Coaches' Trophy has been awarded since 1986.

Two schools are tied for the most trophy wins. Both Alabama and Oklahoma have won the trophy seven times.

It's a huge part of college football history that the Fighting Irish hope to capture this year.

Notre Dame has won the trophy three times, the last being in 1988.

If you'd like to see the trophy up close and personal it will be at 2 area Walmarts on Thursday.

From noon until 2 p.m. it will be at the Walmart on County Road 6 in Elkhart.

Fans of the trophy can get a free online photo taken with it at each location.