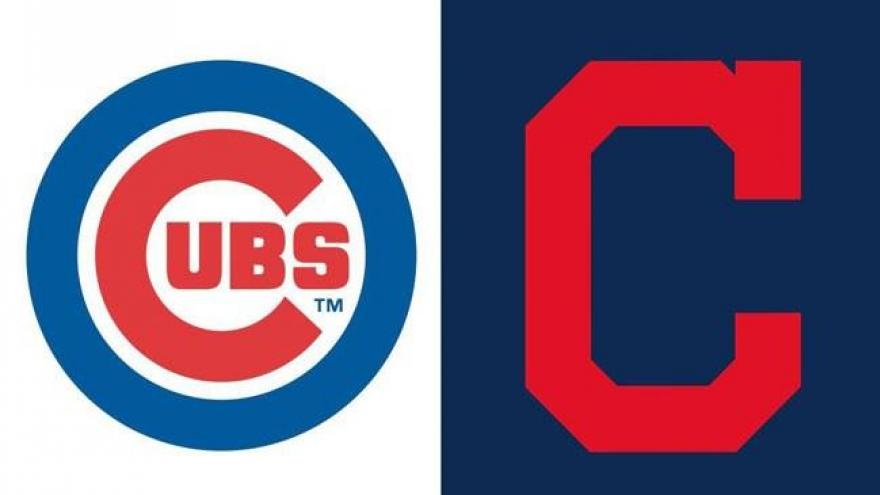 The Chicago Cubs are World Series champions at long last, winning their first Fall Classic in 108 years, defeating the Cleveland Indians in 10 innings 8-7 in Game 7 at Progressive Field in Cleveland.

The Indians were down 6-3 in the bottom of the eighth, but they got to closer Aroldis Chapman, tying things up with an RBI double from Brandon Guyer and a two-run home run from Rajai Davis.

Chapman lost the lead, Cleveland had the momentum, but then play was halted by rain before the start of the 10th inning. The delay lasted 17 minutes.

When play resumed, Chicago got to work.

Kyle Schwarber got it started with a single off Bryan Shaw. Albert Almora Jr., came in to pinch run and advanced to second on a fly out from Kris Bryant. Anthony Rizzo was intentionally walked, bringing up Ben Zobrist.

Zobrist, as he has throughout this World Series, delivered. His RBI double off Shaw drove in Almora Jr. After Addison Russell was intentionally walked, Miguel Montero's single with the bases loaded brought home Rizzo.

The Cubs had eight different players record an RBI, the most of any team in a World Series Game 7.

"It could not have been a more entertaining, difficult series to win," Cubs manager Joe Maddon said.

"I think beyond all that, I want to believe and I do believe this is good for our game moving forward, that we're attempting to seize young fans and not just to play the game, but to be fans of the game. You cannot be more entertained than you were over these last seven games. It's incredible. Of course, I'm not saying that just because we won, but because it's true."

It's the second championship in a row for Zobrist; the Illinois native was part of the Kansas City Royals' 2015 World Series-winning team.

"Man, this one about made me pass out," Zobrist said.

"I felt like the way that the series has been up and down and then Game 7 here, the elation of getting up early in the game and the feeling like we have the game in our grasp, and then it getting away in the bottom of the eighth, and having a little rain delay and coming back and scoring those two in the 10th."

"It was just an epic battle," he continued. "We've been listening to Rocky's soundtrack the last three games. We've got our own Italian Stallion, Anthony Rizzo, that's been putting that on.

"It was like a heavyweight fight, man. Just blow for blow, everybody playing their heart out. The Indians never gave up either, and I can't believe we're finally standing, after 108 years, finally able to hoist the trophy."

Longest drought over at last

The Cubs hadn't won a World Series since 1908, which was the longest drought in baseball. They also broke the curse set the last time they got this far 71 years ago.

On October 6, 1945, a month after the end of World War II, a Chicago tavern owner named William "Billy" Sianis went to Wrigley Field, intending to attend Game 4 of the World Series with his pet goat, Murphy. But, according to the Billy Goat Tavern website, while both had tickets, the goat was denied entry. No animals were allowed in the ballpark, plus Murphy smelled bad.

Sianis, according to legend, threw up his arms and proclaimed, "The Cubs ain't gonna win no more. The Cubs will never win a World Series so long as the goat is not allowed in Wrigley Field."

They had not won since. Until now.

The Cubs are the first team to come behind from a 3-1 deficit to win the World Series since the Kansas City Royals did it in 1985. Chicago also accomplished that feat by winning the final two games on the road. The last team to do that was the 1979 Pittsburgh Pirates.

With the Cubs' win early Thursday morning, the Indians now have the current longest dry spell between championships, last winning in 1948.

This Cubs roster was built by team president Theo Epstein, and he's helped kill a curse before. Epstein's previous job: General manager of the Boston Red Sox. In 2004, the team roster he built won its first World Series since 1918, ending the Curse of the Bambino.

"It's fitting it's got to be done with one of the best games of all time," Epstein said with the World Series trophy in his arms, talking to Fox Sports. "It's unbelievable. What a testament to our players, their grit."

Epstein said this title isn't just for the current team, and he can't wait to bring the trophy back to Chicago.

"Our fans just deserve it so much, and all the former Cubs, everyone, this is for so many people -- (the late) Ernie Banks, (the late) Ron Santo, Billy Williams. ... We're bringing the trophy home to you guys. It's been a century in the making."

Cubs lineup gets to Kluber

Indians starter Corey Kluber had been dominant this postseason, including getting wins in Games 1 and 4. Entering Game 7, he had allowed just three earned runs in 30 1/3 innings this postseason, striking out 35 with an ERA of 0.89.

But Kluber struggled, giving up four runs on six hits in four innings. It was his first career game (134 starts, five relief appearances) where he failed to record a strikeout.

In the top of the first inning, Dexter Fowler hit the first lead-off home run in a winner-take-all Game 7 to give the Cubs a 1-0 lead.

Cleveland answered in the bottom of the third inning, with Carlos Santana driving in Coco Crisp with an RBI single. Chicago, though, wasn't finished.

In the top of the fourth, Bryant singled to left for the Cubs. Rizzo was hit by a pitch. Zobrist reached on a fielder's choice to put runners on first and third.

A Russell sacrifice fly brought home Bryant to regain the lead. Willson Contreras doubled off the wall in center and drove in Zobrist to make it 3-1.

In the top of the fifth, Javier Baez, the final batter Kluber faced, hit a solo home run. It was 4-1. In the same inning, a Rizzo single brought home Bryant for the fifth run. The Cubs were cruising.

In the bottom of the fifth with two outs, Maddon elected to take out his starter, Kyle Hendricks, with a runner (Santana) on first. In came Jon Lester, coming off two days' rest, and his catcher, David Ross. It didn't go so well for Chicago initially.

Jason Kipnis hit a soft grounder. Ross' throw sailed past first base, and Kipnis reached on an infield single. Santana advanced all the way to third while Kipnis went to second on the Ross error.

With Francisco Lindor at the plate, a Lester wild pitch bounced off Ross. On heads up base running, Santana and Kipnis scored to make it 5-3.

But any second guessing of Ross was erased in the top of the fifth inning, when the 39-year-old connected on a solo home run to center to give Chicago a 6-3 lead. And with that insurance run came history. Ross -- playing in the final game of his career -- is the oldest player to hit a home run in a World Series Game 7, at 39 years, 228 days old, edging Willie Stargell (1979) by three days.

This was the 60th extra-inning game in World Series history, and it was the fifth time that happened in a decisive game. The most recent instance also involved the Indians, and it too was a painful loss.

And like 1997, this one is going to sting a while for Indians fans.

"It's going to hurt," Indians manager Terry Francona. "It hurts because we care, but they need to walk with their head held high because they left nothing on the field. And that's all the things we ever ask them to do. They tried until there was nothing left."