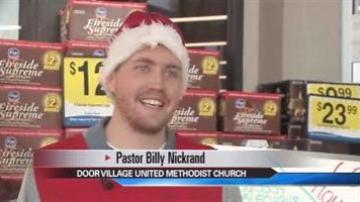 LAPORTE COUNTY, Ind. -- A LaPorte man is hoping to ring his way into the record books by ringing the Salvation Army bell for 60 hours straight.

Pastor Billy Nickrand is a triathlete, but he hopes to add another sport to his list: extreme bell ringing.

He hopes to tune out the constant noise.

“I'll ignore it as much as I can but for the most part I think it'll just be like when a child goes 'Daddy daddy daddy,' After a while you just don’t hear it,” said Nickrand of Door Village United Methodist Church.

His challenge: ring the Salvation Army's bell nonstop for 60 hours. He started the challenge Thursday afternoon.

“For every hour I ring the bell I get a 5 minute break. So when I'm on my breaks I'm allowed to eat, drink, if I want to pass out I can do that but I got to be back before the end of the break,” said Nickrand.

He called up the Salvation Army to volunteer with one simple goal in mind.

“To get involved with the community and help out those that are less fortunate. That’s the main reason I'm here and I think it’s because I'm a little crazy,” said Nickrand.

Sixty hours of bell ringing seems like a very long time because it is. But Pastor Billy says he's going to use a lot of different techniques such as the wrist, the full arm bell swinging, the wheel and even a little swirl action.

“Billy's obviously an athlete but more than that when you look into his heart and when you talk to Billy you realize he has a real compassion for the community, the ministry and that’s something you can't replace,” said Greg Irwin, Corps Administrator.

So Nickrand is going to ring away the next few days to hopefully meet his goal of raising $5,000.

“I think I’m good to go I just got to take it easy, ring my bell and enjoy the ride,” said Nickrand.

If you want to help Nickrand, he is ringing the bell at the Kroger on Pine Lake Avenue in LaPorte.

Click here to view a livestream of Nickrand ringing the bell.