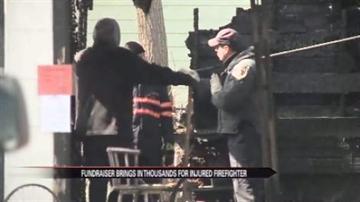 ABC 57 is told the surgery went well, but he is still recovering in a burn unit.

The second full week of March, the lieutenant responded to a Benton Harbor fire and was seriously burned.

The community showed its support to the firefighter and his family.

Saturday morning, they hosted a community breakfast to raise money to offset his medical costs.

The community raffled off $10,000 in merchandise and ate thousands of pancakes in support.