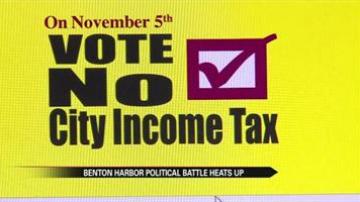 BENTON HARBOR, Mich. -- ABC57 obtained campaign finance reports for the group that is seeking an investigation into Commissioner Trenton Bowens' campaign funds in regards to his campaigning in favor of the Benton Harbor city income tax.

Citizens for the Success of Benton Harbor actively campaigned against the Benton Harbor city income tax vote. The group's treasurer of record is Troy Rolling.

According to the campaign finance report, the group raised more than $5,000. Their largest donor was Jeff Noel, the Vice President of Communications and Public Affairs for Whirlpool. He donated $3,800.

The campaign report shows the group spent more than $5,000 campaigning. Half of that money went to a consulting firm called The Political Company.