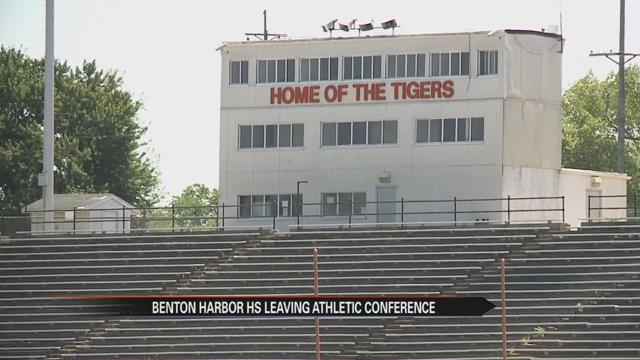 Declining enrollment within the Benton Harbor School District is now taking its toll on the high school’s athletic department.

Weatherspoon was quoted in the Herald Palladium saying “We hold our own in basketball, but we get the snot beat out of us in football.”

This news comes just weeks after the school’s marching band program was put on hold.

“I think the morale is down. But the more days pass, the better the morale is going to get. It’s just the initial shock and jolt because every news that we get about our district for the most part has been news that hits us in the gut,” said Danny Jennings, varsity baseball coach at Benton Harbor High School.

But Jennings said the community has to realize Benton Harbor High School is not the same school it was 20 years ago.

“We have to face the reality that we’re not a 1500 student high school anymore. It’s 600 students now. So when we were 1500 students, 1600 students, you had a large pool to select from and you had more people competing for positions, more people trying out for athletics, more people challenging each other at practice. And you had leverage as a coach as well to say ‘Hey if you’re not going to get the job done I’m going to send you home because I have two more people who would love to eat your lunch today,’” Jennings explained.

Jennings said this discussion has been going on over the past two years.

At this time it is unclear what conference Benton Harbor will join.