Benton Harbor mayor says he will fight for reelection 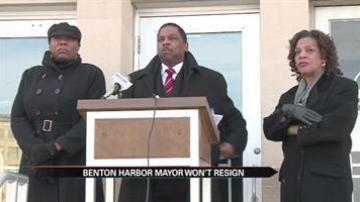 BENTON HARBOR, Mich. -- Benton Harbor Mayor James Hightower held a press conference Thursday morning and declared he will not resign. He is facing an election in May because a citizen got over 400 signatures on a recall petition.

Hightower said instead of resigning, he will campaign for re-election.

"I am not stepping down. I am campaigning and asking the citizens of Benton Harbor to retain me as your mayor," said Hightower.

Hightower says this recall process is the last thing the city of Benton Harbor needs.

"It's at a very bad time," said Hightower. "It means there will be an unscheduled unbudgeted election on May 6."

An election that the mayor says will cost tax payers close to $7,000.

For Hightower, the frustration doesn't stop there.

"The circulators or I should say outsiders, don't even live in this city," said Hightower.

Edward Pinkney, the person who took the petition door to door, lives outside of the city limits, in Benton Township. He doesn't pay city taxes.

"They have no interest in our city. They have fought progress and every positive thing that has been done in this city they're a cancer to our community," said Hightower.

Pinkney does not have the right to vote in the election, so we asked why he felt so invested.

"My organization, the majority, more than 500 of them live in Benton Harbor, that's why we was able to get the signatures," said Pinkney.