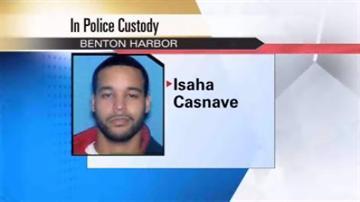 BENTON HARBOR, Mich. — The suspect Benton Harbor police have been looking for is now in custody.

Isaha Casnave is a suspect in the murder of Tanita Broyles. She was killed when she was shot multiple times.

According to police, Casnave was found in the trunk of a car at the corner of Red Arrow Highway and Euclid Avenue in Benton Township.

Police say that at the time of the arrest, officers also found and seized a semi-automatic handgun. They are not yet sure if the seized weapon was the weapon used for the murder.