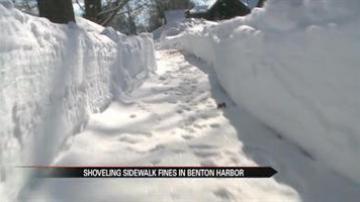 BENTON HARBOR, Ind. -- Residents of Benton Harbor could face a $500 fine if they don't shovel their sidewalks soon. Just last month, many residents were stranded because the city couldn't get all the streets plowed.

“Citizens have been calling me complaining about well as soon as we shovel it, the trucks plow it back onto the sidewalk," said Mary Alice Adams, Commissioner for the city of Benton Harbor.

Adams has been hearing non-stop from Benton Harbor residents about the new mandate that they clear their sidewalks or pay a hefty fine.

With only two plow trucks for the entire city of Benton Harbor, this winter’s unrelenting snow has been unevenly distributed.

“Stuck in the snow, I mean even four-wheelers have had a hard time. The citizens of this community are taxed so much and get so little, I just don’t think this is the time to be enforcing such a thing on this community," said Adams.

But others on the city commission do not share Adams’ view. Commissioner Sharon Henderson supports the idea of the fine.

We asked why the city's residents should be punished for not shoveling when Benton Harbor's streets went uplowed for weeks.

“That is not hypocritical because they are cleaning off the streets. People have complained since the heavy storms about what public works has been doing. We have a limited number of trucks as you know so I think they have been doing the best that they can with the equipment that they have. And I think it is hypocritical for the citizens to say and complain, but when you call them to action then it's ‘Oh, that’s not something we should be doing,’” said Henderson.