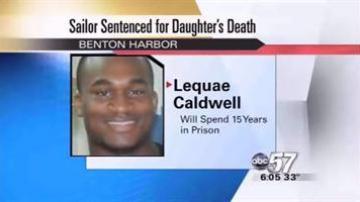 YOKOSUKA NAVAL BASE, Japan -- A Benton Harbor sailor is headed to prison for killing his 5-month-old daughter!

The military newspaper, "Stars and Stripes," reports 23-year-old Lequae Caldwell hit the baby with two "karate chop-like blows" last January when mounting stress from his job and having to provide for his family made him snap and take his anger out on the child.

A judge sentenced him to 21 years in prison. But because Caldwell confessed to the murder, he will only serve 15.

He was also dishonorably discharged.