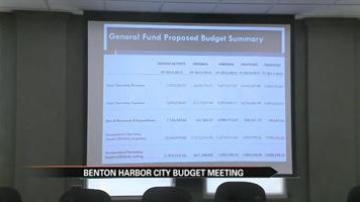 BENTON HARBOR, Mich. -- Benton Harbor city leaders were criticized for planning a public hearing about the city's massive debt in the middle of the afternoon on a weekday when most people are at work. Only a handful of people made it to the meeting Wednesday afternoon.

Officials say the city was more than $2 million in debt, but they say there is help in the form of an emergency loan from the state.

The city of Benton Harbor has struggled with its debt for years, but for the first time in a long time, the proposed budget for 2015 and 2016 would have a surplus.

"We tend to be overly conservative when it comes to our revenue projections and expenditures. We would rather underestimate revenues and overestimate expenditures," said Lundquist. "The overall budget had operating revenues at $6.6 million. The amended budget will now include emergency loan proceeds which were received at the beginning of February."

Those proceeds are part of a $2.3 million loan from the state to help pay off some of the city's debts.

Benton Harbor officials say because of that loan, the city's budget is projected to be in the green for at least the next couple of years.

"We are in a position now with the receipt of the emergency loan and the cost measurements that have been taken to have an ending accumulated surplus of $1.6 million," said Lundquist.

There were just a couple of questions from the handful of people who showed up.

Those concerns were about the poor condition of the streets in Benton Harbor and how soon they can be fixed.