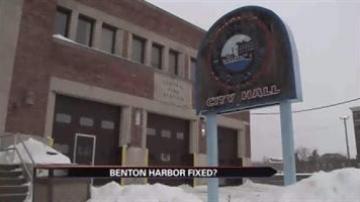 But some people in the community still have their doubts.

“We always see a lot of money come through Benton Harbor. But we always see Benton Harbor remains the same. So I’ll take a wait and see approach to how the budget has been balanced and what that means for the citizens,” says Reverend Maurice McAfee.

Saunders says in the year since he took control of the city, Benton Harbor’s deficit has been eliminated and the city has paid 100 percent of its yearly pension payments for the first time in 10 years.

Benton Harbor Mayor James Hightower says he will miss Saunders' leadership but now it’s time for other city leaders to take the reins.

Decisions he hopes will attract new business to Benton Harbor.

Residents say they’ve seen some improvements but nothing substantial, especially when it comes to new jobs.

“I’ve seen some parishioners get jobs, but are they family stabilizing jobs, and that’s the difference,” said Reverend McAfee.

Commissioner Marcus Muhammad, who is running for mayor, says if elected he plans to stay on top of the budget.

“As mayor I would be in close communication with the state treasury as well as the governor’s office to ensure that the city of Benton harbor does not slide or decline back into a state of quote on quote financial emergency,” says Muhammad.

And current Mayor Hightower has his own strategy.

“I plan to keep residents informed. Work with the commission as they work with me and to say it like it is.”

Right now residents like Reverend Mcafee are cautiously optimistic about the city’s future.

“I believe it will get better. If we continue to make the strides that we need to make for all people. Just not the haves, but the have nots.”