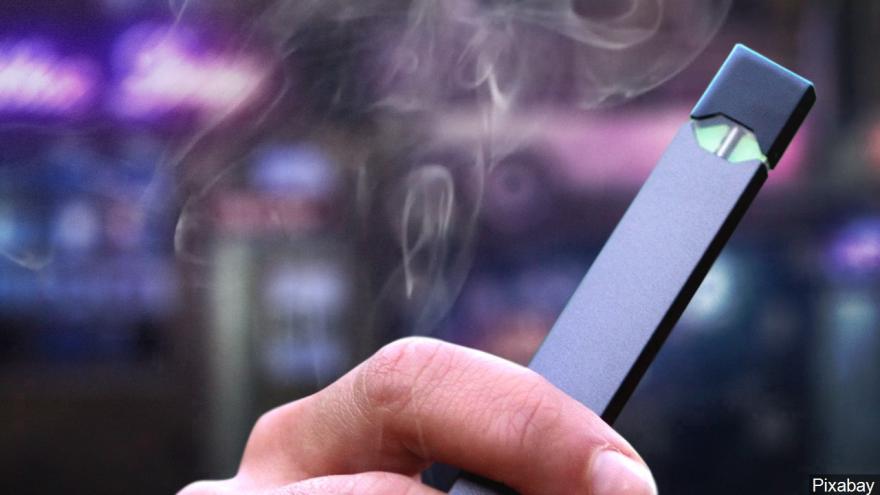 The health department does not yet have data for the 2018-2019 school year, but officials expect the results to be grim.

“We expect that number to double when we get those numbers,” said Lisa Peeples-Hurst, the public health promotion and prevention supervisor at the Berrien County Health Department.“Tobacco companies traditionally market to young people. They know that have to get their next smoker out of our young people.”

Learn more about what health officials are saying about vaping prevention: https://t.co/ddtHJH7rLu pic.twitter.com/xf7Ku6uioR

Peeples-Hurst said that these companies are directly marketing to children by placing shops in areas they frequent and creating specific flavors like fruit-based flavors and cotton candy.

However, a more common vape oil flavor made the news Tuesday when a new study shared that of 200,000 young people surveyed, 60% favored mint or menthol.

Peeples-Hurst said that the use of mint or menthol oil can be problematic, as users are able to effectively hide vaping activity. The residual scent left mirrors that of having just eaten a mint.

At first, officials did not think that high school students were using menthol flavors but in reality, they are, according to Peeples-Hurst. She says that students who are going to vape, will, and will use the flavors that are available to them.

“We’ve had an explosion of calls and people seeking information, both students and parents and concerned individuals, service providers, you name it, especially when our governor initially banned the vaping oils,” Peeples-Hurst said.

People had health questions because it was something that was seen as relatively harmless, Peeples-Hurst said.

In October, a judge temporarily blocked Michigan's ban on flavored e-cigarettes. Peeples-Hurst thinks that enough people want to keep youth from vaping that the issue will stay within the courts for a while.

"It'll probably be like tobacco was years ago," Peeples-Hurst said.

A federal-level ban was announced in September, which would require that e-cigarette companies take their flavored products off the market, including mint and menthol.

"A ban would send a strong message to kids that this is something you shouldn't do," Peeples-Hurst said.

While she believes in a ban at both the state and federal level, Peeples-Hurst thinks that preventing youth vaping starts with education.

“Young people need to know what happens to their bodies when they vape,” Peeples-Hurst said.

The health department places ads and signs in schools, provides discussion kits to parents and schools, and administers anti-vaping presentations to groups in their efforts to stop youth vaping.

While neither of the two confirmed cases of vaping-related illness or injury in Berrien County were in youth, in the state of Michigan, young people are starting to see negative health impacts from vaping in other parts of the state.

According to the Michigan Department of Health and Human Services, there are currently 44 confirmed and probable cases involving vape-related illness or injury in the state, with victims ages ranging from 15 to 67.

One death related to vaping has been reported in the state of Michigan, according to the MDHHS.

Nationwide, as of October 29, 1,888 cases of e-cigarette or vaping product use associated with lung injury was reported to the CDC from 49 states. Thirty-seven deaths were reported.

To learn more about information on vaping-related illness or injury, visit the CDC's website.

October data is shown on the map below, identifying where vaping cases are prevalent in Indiana and Michigan. (Michigan did not report specific county information and Indiana did not share data for counties with less than five vape-related cases)