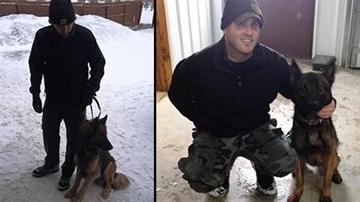 BERRIEN COUNTY, Mich. -- The Berrien County Sheriff's Office will be receiving bullet and stab protective vests for two of its K-9s, Pokky and Nero.

The vests are a donation from the group Vested Interest in K-9s, Inc.

The group is providing vests to over 350 law enforcement dogs nationwide in memory of K-9 Rocco of the Pittsburgh Police Department. Rocco died in the line of duty in January 2014.

The vests will be embroidered with In Memory of K9 Rocco, Pittsburgh Police Department.

Pokky is a 4 year old Belgain Malinios from Holland. He is extremely driven to deter crime and cannot stand drug use, people who do harm to others, and outright malicious intent. Pokky is trained in the detection of narcotics, tracking, and apprehension. Pokky loves his Kong toy and gets extremely excited to go to work. When he is relaxing, he loves to go for walks, visiting with children, and playing fetch. Pokky is currently partnered up with Deputy Thomas Dyer.

Nero is a 3 year old Belgain Malinois from the Czech Republic. Nero has a strong drive to deter crime, protect citizens and his handler. Nero is trained in the detection of explosives, tracking, and apprehension. Nero loves to play with his tennis ball. Nero’s favorite time of the day is when he gets to get in the police car and go to work with his handler. On Nero’s time off, he likes to go for walks and play fetch with his tennis ball. Nero is currently partnered with Deputy Brandon Crosby.