Berrien County residents fed up with bad roads and bridges 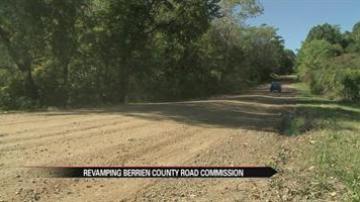 BERRIEN COUNTY, Mich. -- Some homeowners in Berrien County aren't happy with the way their Road Commission is being managed. There have been a series of shake-ups and personnel issues over the years.

Currently, the Road Commission is operating without a managing director or a finance director.

Homeowners say that lack of leadership has led to deteriorating roads and bridges.

County officials are trying to figure out whether to take the Road Commission over completely or look for someone to manage it.

At Thursday morning's Berrien County Board of Commissioners meeting, homeowners made it very clear that they are tired of waiting.

The county has no shortage of beat up, crumbling roads.

A problem Stewart says goes beyond the streets.

He has called the county repeatedly to ask about issues with roads and drains in his neighborhood, but hasn't had any luck.

"There seems to be a flaw in the human condition. We know how to build things, but we don't know how to maintain them," said Stewart.

Currently, the County Road Commission has no permanent managing director.

That's something Berrien County officials say they're trying to fix.

We asked county officials to explain the pros and cons of each option, but they declined saying they didn't feel comfortable talking on-camera about it right now.

That lack of transparency has some people uncertain about  whether the county can proceed with any option.

"Nobody from either board has extended their hand or done anything to say, 'Let's help you.' Or 'Let's change the system,'" said Stewart.

The Board of Commissioners will hold another public meeting later this month where more options will be laid out.

Officials say they hope to make a decision on this in early November.