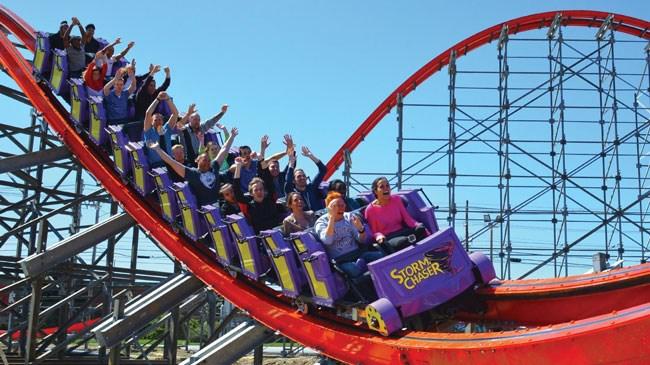 (CNN) -- Want to play Superman or Wonder Woman and save the world? Or fight off an alien invasion as part of an intergalactic air force?

Get ready to ride.

Virtual reality roller coasters, 3-D and 4-D attractions and immersive "dark" rides that bring visitors into the storyline -- and sometimes even influence it -- will be heating up theme parks across the United States this summer.

"The virtual reality roller coaster experience is a new hot trend that hit the market this year and has the potential to be game changing," says Colleen Mangone, spokeswoman for the International Association of Amusement Parks & Attractions.

The 3-D and 4-D attractions put riders in a make-believe world with the use of headsets, sounds, movable seats, sound, 3-D glasses and the 4-D effects of real wind, water and heat.

Many are "dark" rides, located entirely inside a structure, where the riders can only see the ride elements.

Interactive rides allow guests to fight for justice or another cause using specially designed laser guns or even just their hands -- and their experiences can change every time they get on board.

This year, theme parks in the United States and Canada are expected to attract more than 390 million people and generate $22 billion in revenue, according to the IAAPA Global Theme and Amusement Park Outlook 2015-2019 report.

The competition to keep fans coming back is intense.

Six Flags is opening more than 30 new rides across the country this year, a company spokeswoman confirmed. There are more than 100 rides and attractions opening this year in the United States alone, says Mangone.

Here are some of our picks for the summer season.

Leave your lunch behind.

Riders on a mission end up fighting for their survival traveling through an ancient temple, a prehistoric jungle and underworld caves, all to face the king himself.

"King Kong" movie director Peter Jackson is consulting on the project, which is likely to open after a June 23 press preview day.

Opening Memorial Day weekend, riders will get to join forces with Batman, Wonder Woman and other Justice League members to do battle with the Joker and Lex Luthor in Six Flag's "Justice League: Battle for Metropolis" 4-D dark ride.

As members of the Justice League Reserve Team, riders get to shoot at targets along the way.

Adventureland waited a long time to debut a new ride -- more than 20 years -- but the theme park went all out with "The Monster" steel roller coaster.

The ride, which opens in June, will feature a 2,500-foot long track with a 133-foot vertical lift hill, a 101 degree drop and a negative-G stall loop.

That's a slow loop that creates a sensation of falling out of the roller coaster.

It features 12 airtime moments and multiple inversions -- including a corkscrew and 10-story barrel-roll drop from the first lift hill.

Even shorter: Superman takes over a traditional steel coaster, "Bizarro," and transforms it into a virtual reality ride.

"Superman the Ride" draws guests to Superman's war against evil in the fictional world of Metropolis and follow Superman as he battles evil.

Opening in June, the ride will reach speeds of 77 mph along a mile-long track.

Can't get to New England to meet your favorite superhero?

Heading to the boardwalk in Ocean City, New Jersey, can be a trip back in time.

But the beachside Castaway Cove theme park also has rides to knock that cotton candy out of your hand.

This summer, the park will open the 125-foot-tall "GaleForce" three-launch roller coaster, reaching speeds up to 64 mph, a 90-degree drop and multiple inversions.

"Mako" is a 200-foot-tall steel roller coaster making tight turns and steep drops, reaching speeds of up to 73 mph during the three-minute ride.

Traditionalists can ride the "Steamin' Demon," which has three inversions, a loop coaster and double corkscrew, as it was introduced in 1984.

But starting June 25, riders can wear a Samsung Gear Virtual Reality headset and be transported into a realistic 360-degree virtual world where riders are fighter jet co-pilots trying to save the planet from an alien invasion.

The air-to-air combat is synced with twists and turns of the coaster.

When the new "Massiv" ride at Schlitterbahn Waterpark in Galveston, Texas, opens in mid-June, weather permitting, it'll be the tallest water coaster in the world, the park says.

Exactly how tall, park officials will not yet say.

Guests must hike up 123 steps carrying a tube to reach the top of the slide. The ride, including four uphill sections with six blaster jets, is 926 feet long (longer than two football fields).

It includes a triple-drop ending into a landing pool.