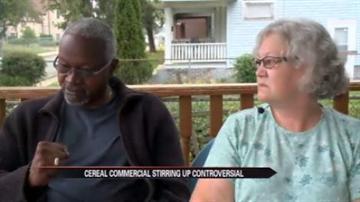 SOUTH BEND, Ind-- We asked, and you responded. An overwhelming number of viewers wrote in their opinions about the latest Cheerios ad. One bi-racial family in South Bend says, "It's about time!"

Viewer Marilyn Carter had this to say about the newest Cheerios commercial airing on our station.

"I found that one commercial offensive to my taste, for my generation, of the bi-racial couple."

Carter said everything she saw it on the air, she changed the channel. It features a white mom, black dad, and their bi-racial daughter.

After airing the story, many viewers wrote into the station saying that it's about time the media features a bi-racial family.

Harry and Mickey Marsh tied the knot 37 years ago. Four grown children and many grandchildren later, they say their family is as diverse as it gets.

So when they first saw the newest Cheerios commercial, they cheered!

That's just the reaction Cheerios wanted. ABC57 reached out to General Mills, the maker of Cheerios, who responded: "Consumers have responded positively to our new Cheerios ad. At Cheerios, we know there are many kinds of families and we celebrate them."

"When you boil everything off of it-- and you take everything away from it- we're still just people," said Harry Marsh.