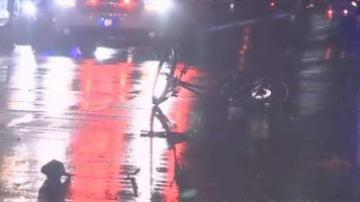 SOUTH BEND, Ind. -- St. Joseph County police say a woman who was hit by an SUV on Indiana 933 and St. Mary’s Road has died.

Erin Zick, 34, from Edwardsburg was driving north on Indiana 933 when she said she went through the green light at Angela Boulevard.

Police said the woman on the bike, identified as 19-year-old Ziqi Zhang of Jiangsu Province China, was heading west towards Saint Mary’s when she was hit.

Traffic was blocked for two hours during the investigation.

Zhang was taken to Memorial Hospital and pronounced dead shortly after.

Officers have confirmed alcohol and drugs were not a factor and believe weather could have played a role in the accident.

Zhang was a sophomore at St. Mary's College.

“On behalf of the entire Saint Mary's College community, I want to express our shock and deep sorrow at the passing of Ziqi Zhang. We offer heartfelt condolences to her parents and sister and our prayers are with them. Death is never easy, especially when it is a young person with so much promise," said Carol Ann Mooney, president of Saint Mary's College.

The school is going to have a memorial service for Zhang.

"We are going to have a memorial service for her on Tuesday at 12:30 in Regina Chapel, just for students and faculty," said Gwen O'Brien of Saint Mary's College.