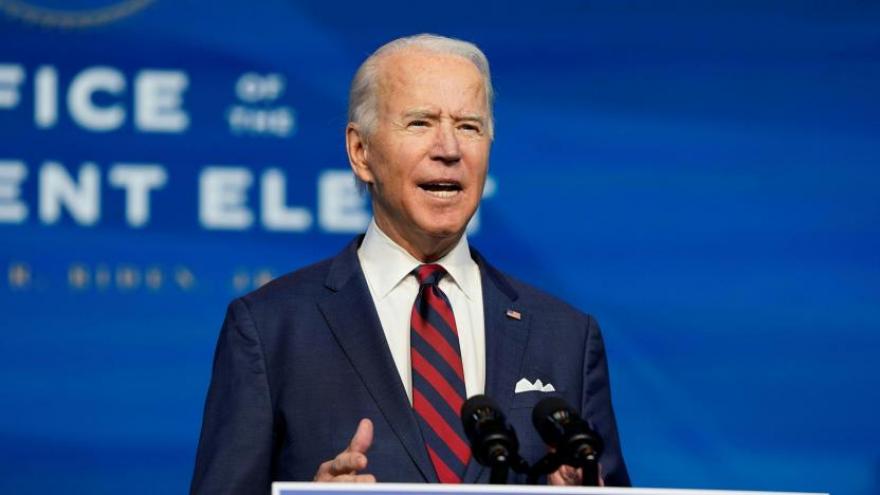 (CNN) -- President-elect Joe Biden has decided to nominate Judge Merrick Garland as attorney general, people familiar with the matter tell CNN, a long-awaited decision that moved toward completion Wednesday as it became apparent that Democrats were on the brink of winning control of the Senate.

The announcement of the attorney general, along with other senior leaders of the Justice Department, is expected to be made as soon as Thursday as Biden moves closer to filling the remaining seats in his Cabinet before assuming power on January 20.

While Garland has been a top contender for weeks, concerns about the vacancy his selection would create on the US Court of Appeals for the District of Columbia raised alarm bells among Biden and many advisers who believed Senate Republicans would block any nomination to that seat. But with Democrats poised to control the Senate after two Georgia runoff races, those concerns were allayed.

President Barack Obama nominated Garland to the Supreme Court after a vacancy was created by the death of Justice Antonin Scalia in 2016. But Republicans, led by Senate Majority Leader Mitch McConnell, refused for months to hold confirmation hearings or the required vote in the chamber.

When Trump took office, Garland's nomination expired and he returned to his position as chief judge of the US Court of Appeals for the DC Circuit. The court is charged with reviewing challenges to administrative agencies. He stepped down from the position as chief judge in February 2020, but still serves on the court. President Bill Clinton appointed him to the court in 1997.

Defenders of Garland argued he would be a particularly strong choice to lead the Justice Department in the post-Trump era because he is seen as above reproach of partisan politics. Some allies describe him as a "Boy Scout," which is intended to suggest he would be seen as a non-political figure.

His reputation could aide him as he navigates some politically tricky decisions, particularly with an ongoing federal investigation into the business dealings of Hunter Biden, the President-elect's son. Garland could be faced with pressure on whether to name a special prosecutor in the case.

Prior to his appointment as a US circuit judge, Garland served as principal associate deputy attorney general. He supervised the investigation of the 1995 Oklahoma City bombing, which killed more than 160 people and injured several hundred more. Garland also led the investigations of the 1996 Olympics bombing in Atlanta, in which two people died and more than 100 others were injured.

Garland led the investigation into Ted Kaczynski, also known as "The Unabomber," who is currently serving eight life sentences for murder. He killed three people and injured more than 20 others with a string of mail bombings.

The judge served as an assistant US attorney for the District of Columbia from 1989 to 1992, and as deputy assistant attorney general in the criminal division of the Justice Department from 1993 to 1994.

Garland's nomination will disappoint those who had pressured Biden to nominate a person of color as attorney general.

Biden and Vice President-elect Kamala Harris met last month with civil rights leaders and members of the NAACP, who have been pressuring Biden to diversify his Cabinet and create a position within the White House for a civil rights czar. The Rev. Al Sharpton said at a news conference after the meeting that Biden should choose an attorney general with a civil rights background and said his preference would be a Black nominee.

Sharpton said mentioned as potential picks former Massachusetts Gov. Deval Patrick and Tony West, the senior vice president and chief legal officer at Uber who was previously the associate attorney general of the United States under the Obama administration.

Kristen Clarke, president of the Lawyers' Committee for Civil Rights Under Law, said at the same news conference that whoever is selected as attorney general "must have a clear and bold record when it comes to civil rights and racial justice."