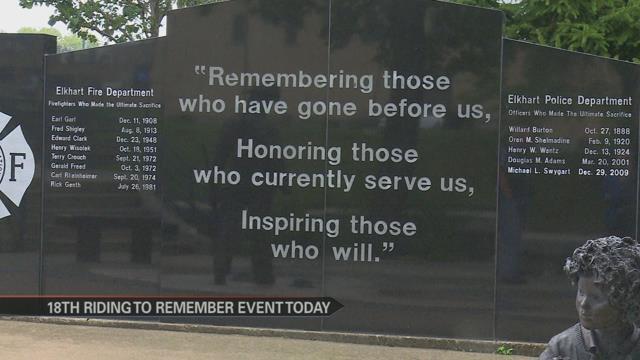 The community is coming together to honor real-life heroes. Motorcyclists will gather today in Elkhart to pay tribute to those who serve our country and to the ones we have lost.

Every year, hundreds of bikers participate in the “Riding to Remember” ride. This year marks the ride’s 18th anniversary.

With the ride falling on the fifteenth anniversary of the September 11th terrorist attacks, it has extra meaning.

“We ride to honor those who have gone before us and to honor those who are currently serving, while trying to inspire those that may want to become police officers, firefighters or military,” said Corporal Jim Ballard from the Elkhart Police Department.

The ride is seventy-two miles long. Bikers will ride through neighboring cities including Nappanee, Wakarusa, Bristol, Middlebury and Goshen. They will make a brief stop in Goshen for a memorial service honoring Elkhart County’s fallen heroes.

Corporal Jim Ballard organized the first ride in 1998, and has been behind it ever since.

“I just have a sense of giving and charitable work,” Ballard said. “It’s the way I was brought up, so it’s just kind of in my DNA so to speak,” he said.