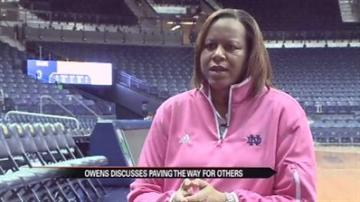 Notre Dame Women’s Basketball Associate Head Coach Carol Owens is a trailblazer in the community. She serves as president of the Black Coaches Association and is paving the way for others through leadership and service.

Those who have seen Owens in action, on the side-lines, or at practice know better.

Owens quickly made her agenda as president of the Black Coaches Association clear.

"This is not a job for me. This is my passion. And helping people is what I do,” said Owens.

As we spoke about the many people who have paved the way for her, one in particular brought a huge smile to Owens' face.

"Muffett McGraw has been a mentor of mine. I wouldn’t have been able to experience the success I've had without great mentors,” said Owens.

In turn, Owens says she works tirelessly to do the same for others.

Especially for minorities in areas where their leadership is lacking.

"We look at the hiring percentage of minorities every year. That's always something that's a concern for us. Especially in women's basketball and football,” said Owens.

She says those sports have the lowest percentage of minorities for BCS major institutions.

The BCA hiring report for 2011-12 shows a slight decline in several areas, including the number of diverse candidates getting interviews and the diversity of hiring search committees.

Owens says she's working to make sure there's a more even playing field in terms of the hiring process.

"I've seen her from the beginning of her coaching career to where she is now. She's a tremendous role model for our players. I'm so proud of what she's accomplished,” said McGraw.

Owens took on the role as the president of the Black Coaches Association in the fall and there are already changes in the works.

Owens couldn’t get too specific, but she says something big is coming to make the association more inclusive of all minorities.