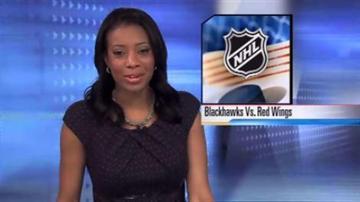 CHICAGO — The Blackhawks are moving on to the NHL conference finals. And the Cubs are proving no match for their crosstown rivals.

On Wednesday, the Chicago Blackhawks went into game seven tied at three games a piece. But the 'Hawks came back to win two games in a row. The Blackhawks beat the Detroit Redwings 2 to 1.

The Blackhawks will take on the L.A. Kings at the conference finals on Saturday at the United Center.

On the northside of Chicago, the Cubs and White Sox were back in action as the Crosstown Classic continued.

Tuesday's game was postponed because of storms. No make up date has been set.

The Cubs hoped to continue their winning ways when the series moved to Wrigley on Wednesday.

With a win on Thursday, the Cubs could claim the Crosstown trophy for the first time since 2007.