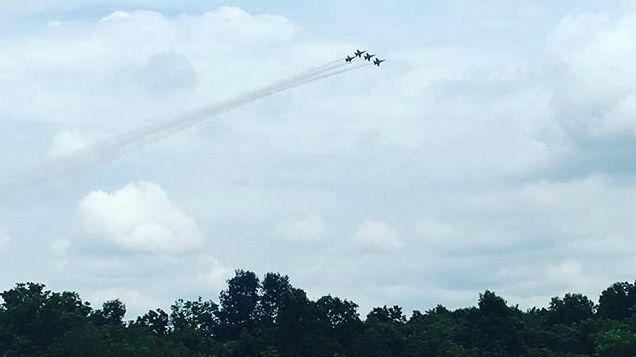 (CNN) -- The pilot of a Blue Angels jet was killed Thursday during practice for a weekend air show, hours after a Thunderbirds F-16 crashed following a flyover at the U.S. Air Force Academy commencement ceremony attended by the President, officials said.

The Navy said the Blue Angels pilot died from injuries suffered in the crash in Tennessee.

The Thunderbirds pilot safely ejected before the plane went down in Colorado, officials said.

A Navy statement said the service was in the process of notifying the pilot's family and the pilot's name was being withheld.

The crash occurred at the beginning of practice, just after the pilot took off, the Navy said. The plane went down about 2 miles from the Smyrna airport.

None of the five other Blue Angels jets was involved in the incident.

"My thoughts and prayers go out to the family and friends of the Blue Angels after this tragic loss," Chief of Naval Operations Adm. John Richardson said. "I know that the Navy and Marine Corps team is with me. We will investigate this accident fully and do all we can to prevent similar incidents in the future."

Smyrna Fire Chief Bill Culbertson said there were already units on the flight line so his crews were able to respond to the crash scene within minutes.

The crash occurred near a former plantation called the Sam Davis Home that is a tourist site, and it also wasn't far from an apartment complex, Culbertson said.

Just a few hours earlier and about 1,150 miles away, the Thunderbirds F-16 crashed south of Colorado Springs, Colorado, after it and other Thunderbirds flew over a graduation ceremony attended by President Barack Obama.

Lt. Col. Christopher Hammond, commander of the Air Force's Thunderbirds demonstration team, told reporters that the pilot, Maj. Alex Turner, experienced an unspecified problem as he was trying to land after the flyover and ejected.

"He had already put his gear down, and that's when the incident occurred," Hammond said, adding that Turner radioed that he was maneuvering so he wouldn't hit any houses. "He made a conscious effort to direct his aircraft away from some of the local neighborhoods."

The crash occurred 5 nautical miles south of Peterson Air Force base, well away from the stadium where the military branch's ceremony was taking place, officials said.

There were no reported casualties on the ground, though the plane was badly damaged, said Robb Lingley of the Peterson Air Force Base public affairs department.

President Obama later met with the pilot when he visited the air force base.

"The President thanked the pilot for his service to the country and expressed his relief that the pilot was not seriously injured. The President also thanked the first responders who acted quickly to tend to the pilot," White House press secretary Josh Earnest said.