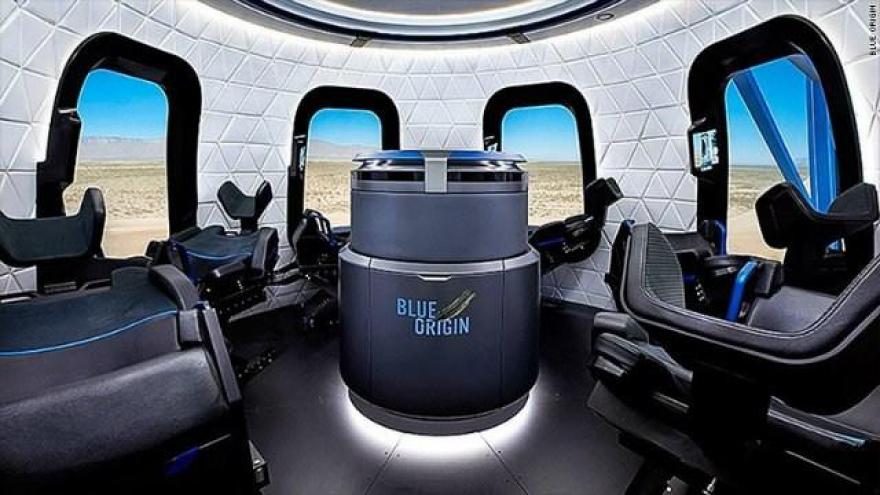 NEW YORK (CNNMoney) -- This is the first look at Blue Origin's room with a view -- inside the capsule that will launch tourists into space.

The company's goal is to eventually take paying customers into suborbital flight, or about 60 miles into space.

The capsule features six seats arranged in a circle around a glowing blue consoles.

The seats are spaced evenly along a circular bulkhead, adjacent to a series of windows the size of car doors.

Blue Origin -- the private space venture headed by Amazon CEO Jeff Bezos -- calls them the "largest windows in space." They're 42.7 inches tall, which is nearly triple the height of a passenger jet window.

The cozy-looking capsule is 530 square feet, which is larger than a Manhattan studio but not by much. Blue Origin said it's 10 times the amount of elbow room that Alan Shepard had on his Mercury flight in 1961, when he became the first American in space.

Blue Origin is also focused on ensuring the capsule is safe. The company crash tested an unmanned capsule last year to ensure that even if something goes wrong, passengers will survive.

The capsule will attach to Blue Origin's New Shepherd rocket. That rocket has made headlines over the past year as the company has conducted unmanned test launches that end with the rocket landing safely back on Earth's surface.

Launching and safely landing rockets is key to Blue Origin's business model since reusing rockets drastically brings down the price of a single launch. That means cheaper tickets for potential space tourists. Historically, rockets -- which cost tens of millions of dollars -- have been used just once and then discarded.

SpaceX, headed by Tesla CEO Elon Musk, has also been working to perfect rocket landings. It plans to relaunch its first rocket on Thursday.

Blue Origin has not revealed how much it plans to charge for a ticket aboard one of its flights, but there are plenty of hints that the company is going to take its first group of tourists to space within a year or so. Bezos plans to conduct the first manned test flights by the end of 2017.

Blue Origin also hopes to one day send rockets to orbital space, where it can compete with SpaceX by delivering satellites into orbit for corporate customers. For that, Blue Origin is developing a new rocket called New Glenn, named after astronaut John Glenn.