Board keeps Galien Township School District open, no 7 and 8 grades 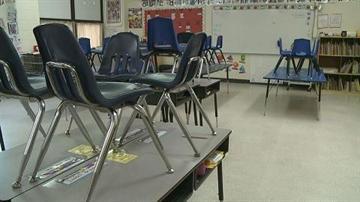 GALIEN TOWNSHIP, Mich. – With a conservative budget developed from an estimated enrollment of 45 students next year, Galien Township School District board members voted to keep the school open.

The decision did not come without some sacrifice; grades 7 and 8 were cut from those offered at the school district.

The reduction in grades offered is an echo of the decision to close the high school.

With enrollment continuing to diminish, as it has for years, the school board clings to the hope they can continue to operate the school.

School Board President Anne Goodenough put a positive spin on the declining numbers of students.

“We know we can give the kids the special attention that all kids need,” said Goodenough, “we want to keep it an individual learning situation.”

Having small class sizes are desirable for most parents, but some grades at the district are infinitesimal; approaching less than a handful for a single grade in some cases.

That has some school board members worried. “From all the sudden going from having a teacher you can go to with anything; to having one that’s not as easily accessible could be difficult,” said Karey Sebasty, the newest school board member.

Sebasty is also concerned about the lack of funding available because of the financial woes of the district.

Galien Township Schools was caught misreporting the number of students they had enrolled to the state. As a result they are being forced to pay back money that was given to them based on these false counts.

Now, with less than 100 students enrolled between kindergarten and 8 grade, and the fact they will lose the current 7 grade students all together next year, have Sebasty highly concerned they will not have enough money to take care of the random problems that pop up throughout any given school year.

Just last week, the school’s boiler was found broken and classes had to be cancelled for four days because the busted part could not be repaired.

Recently, the board was also informed that one of the district’s vehicles used to transport students may need to be replaced soon. These rainy day problems are something they are not counting on, according to Sebasty.

On top of that, the district’s Superintendent is leaving, have taken a job in Battle Creek. Still, the majority of school board members think at least another year is possible in Galien.

“The community people want the school to remain,” said Goodenough. But a lack of community turn out Monday has some wondering if that is really the case; or if some board members just cannot let go of the past.