Bob Golic in town for ND vs. USC game 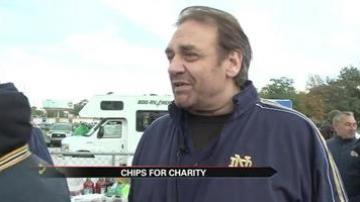 NOTRE DAME, Ind.-- Bob Golic played for the Fighting Irish under legendary Head Coach Dan Devine from 1975 to 1978 and was recognized as an All-American during his time at Notre Dame.

He later played in the NFL for the New England Patriots, Cleveland Browns and the Oakland Raiders.

Here's what he had to say about the historic Notre Dame-USC rivalry during his time playing for the Irish.

“Of course before I got to Notre Dame they had the Anthony Davis game where they came back and beat us, and then when I was here was in ’77 for the green jersey game, which was just amazing and a story of lore,” former Irish player Golic said.

That legendary game Golic is talking about is when Coach Devine had players wear green jerseys for the first time. The Irish beat USC 49-19 that year and went on to win the national championship.