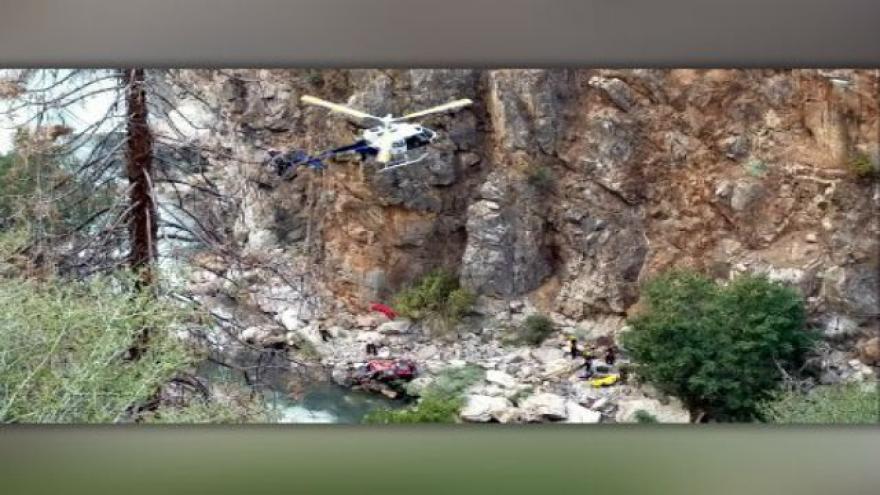 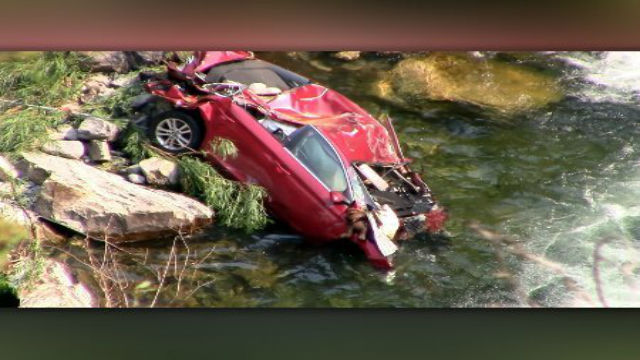 Crews retrieved the bodies Friday in a recovery operation after they determined that conditions were safe to do so. Fresno County Sheriff's Office

(CNN) -- Search-and-rescue teams in California retrieved the bodies of two people missing for weeks after a car swerved off a road in the Sierra Nevada and plunged into a raging river, the Fresno County Sheriff's Office said.

The two are presumed to be Pakapol Chairatnathrongporn, 28, and Thiwadee Saengsuriyarit, 24 -- both exchange students at the University of South Florida.

The car went through a guardrail and crashed 500 feet off a cliff into the Kings River on July 26. The red 2016 Hyundai Sonata rented by the students had been "stuck against a rock," the sheriff's office said in a Facebook post.

Authorities used aerial photography to confirm that two people were dead in the car. Unsafe conditions in the raging river delayed the rescue operation.

Crews retrieved the bodies Friday in a recovery operation after they determined that conditions were safe to do so, the sheriff's office said.

A helicopter put personnel and equipment in a gorge on both sides of the river. A deputy "made his way out to the car" and attached it to a cable from a winch.

The winch pulled the car "a short distance into slower moving water. This made conditions much safer for deputies to access the car. The team then used tools to get inside the car and were able to free both bodies," the office said.

The bodies were put on a helicopter and flown to the roadside.

"Family members met the transport team at Convict Flat Campground where they were able to perform a short ritual," the sheriff's office said.

The car has been left in a canyon and will be recovered later.

The sheriff's office said "positive identifications of the bodies have not been made yet" and the coroner's office "will make those determinations during the autopsy process."

The Thai community in California had expressed frustration over the slow rescue process. "The families are devastated," Thai Consul General Tanee Sangrat said.

Fresno County Sheriff Margaret Mims thanked the Thai Consulate in Los Angeles and the Thai community "for its support throughout this operational planning phase. Having an open line of communication and knowing you were by our side was invaluable."

"I would like to thank the families of the victims for their patience and understanding during this long, difficult process. It's always been our goal to deliver peace to you so that you could hold the necessary services for your loved ones. Hopefully you may now move forward in the healing process," she said.

In an unrelated incident reported in the sheriff's Facebook post, authorities located another vehicle downstream from the Hyundai. That car, which crashed last month, is thought to belong to a missing Chinese couple, but it has not been confirmed. Rescue teams are waiting for better river conditions to access the vehicle.