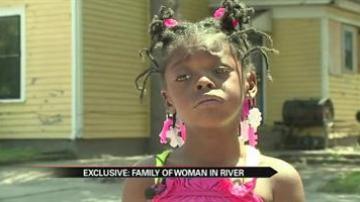 The body was found just downstream from the LaSalle Street bridge Friday.

The Indiana Department of Natural Resources has been searching for her ever since.

"I'm really hurting. I already went through the grief of her being gone. We just wanted her to be found and not be out there in that water by herself," said Tyrone Sims, Anderson's cousin.

Her family says it has been a difficult week.

"I don't want her to be in the river. I want her to stay home. She's going to get hurt," said Damarianna.

She said she knows her mom is in a better place.

"She's up there, she's in heaven and not coming down," said Damarianna. "I miss my momma so very much."

The family is accepting donations at the Clark O'Neal funeral home for help paying the funeral costs.