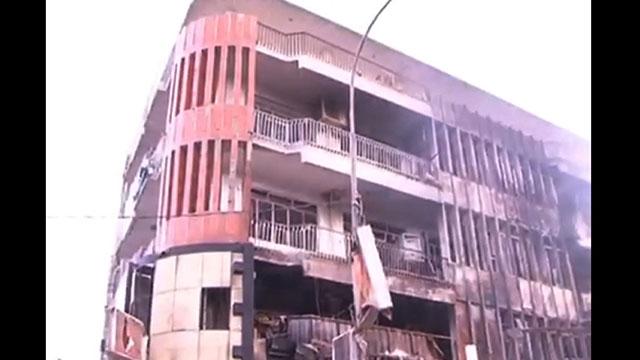 (CNN) -- More than a day after a suicide truck bomb ripped through Baghdad, families are still hoping that rescuers searching through the rubble can locate the bodies of their loved ones.

The bombing early Sunday in a busy shopping district was the deadliest single attack in Iraq's war-weary capital in years, killing at least 215 people, Mohamed al-Rubaye?, deputy head of the security committee of the Baghdad Provincial Council, said Monday on Afaq TV.

Crews remain at the scene in the Karrada neighborhood where the blast occurred, trying to pull bodies from the devastation. Around 175 people were wounded, Rubaye said.

And 81 of the bodies are so charred, DNA testing will need to be conducted to identify them, he said.

One couple at the scene were searching for their teenage son who had gone to a cafe with his friends to celebrate his birthday.

Another man was looking for five relatives, including children, who were buying new clothes for Eid-al-Fitr -- the celebration that marks the end of Ramadan on Tuesday.

ISIS claimed responsibility for the attack, the latest in a string of assaults during the holy month for Muslims, a period of fasting and prayer, and also a time when jihadists launch operations against those they regard as their enemies.

A second bomb exploded Sunday at an outdoor market in the Shaab neighborhood of southeastern Baghdad, killing one person and wounding five others, police said.

ISIS said it would carry out more terror attacks during Ramadan. The Baghdad bombing came after massacres at a cafe in Dhaka, Bangladesh, the Ataturk International Airport in Istanbul, Turkey, and security targets in Yemen. There have also been recent suicide attacks in Jordan and Lebanon.

Last month, a gunman shot up a nightclub in Orlando, Florida, an attacker killed a police commander and his partner in France, and four Israelis were killed at a Tel Aviv market.

ISIS has claimed responsibility for some of these attacks, while the terror group inspired others, authorities said.

"We've had it with the Iraqi government and politicians. They can't continue blaming Daesh and other terrorist groups. We need a solution," he said, using another name for ISIS.

"I lost several friends myself, some are still missing," he said, sobbing.

Iraqis expressed their anger over the situation when Prime Minister Haider al-Abadi and other officials attempted to survey the bomb damage.

Amateur videos posted on social media showed residents throwing objects at a convoy carrying Abadi in Karrada. In the videos, protesters yelled, "Thief!" and "Get out!"

Abadi called the Karrada strike "dastardly" and "cowardly" and said the country will hold a three-day mourning period.

In a statement, Abadi said he understands the reaction of residents in "that moment of grief."

He said he came to Karrada to console families and "share their sorrow in this painful tragedy that happened."

He said ISIS tried to hijack the joy that Iraqis felt over recent victories against ISIS in Falluja.

This flurry of ISIS strikes during Ramadan comes as the United States said the group is losing ground in the warfare across Syria and Iraq.

Iraqi forces announced last week they have seized the city of Falluja, 40 miles west of Baghdad, from ISIS. At the time, authorities assured Baghdad residents that the bombings would stop.

But Cedric Leighton, a CNN military analyst and retired Air Force colonel, said he thinks the attacks will worsen, adding that ISIS' game plan is to generate instability.

"They are trying to create enough chaos in Iraq itself so that the Iraqi forces will find it very difficult to actually take advantage of the forward momentum they have achieved because of their victory in Falluja and that is a very serious issue that the al-Abadi administration is going to have to address."

Attacks such as the one in Baghdad will drive a wedge between the government and the people, in particular Shiites.

"The wedge was already there, and it's fairly easy for them to exploit this," Leighton said.