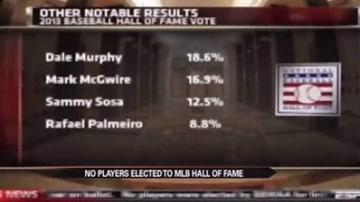 The news underscores the impact that steroids have on baseball.

Barry Bonds and Roger Clemens each received 36.2 and 37.6 percent of the vote respectively. This was the players first time on the ballot.

Although they never admitted to steroid use, they were widely suspected as having used the performance enhancing drugs.

"If there was ever a ballot in a year to make a statement about what we didn't do as players, which is we didn't actively push to get the game clean, this is it," said former Red Sox pitcher Curt Schilling.

Former Houston Astros secondbaseman Craig Biggio received the most votes but still short in his first year on the ballot with 68.2 percent.  And former Detroit Tigers picture Jack Morris pitcher received 67.7 percent in his fourteenth year on the ballot.

A player has 15 years of eligibility on the hall ballot. Both Bonds and Clemens have another 14 years remaining.