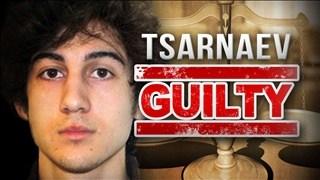 A Boston jury has found Dzhkohar Tsarnaev guilty on all 30 counts related to the deadly 2013 Boston Marathon bombing, meaning Tsarnaev could face the death penalty.

Wearing a dark jacket over a blue shirt, Dzhokhar Tsarnaev entered the courtroom and took his seat next to his attorney Judy Clarke. As the verdicts were read, Tsarnaev did not react and has not looked at the jurors.

He slumped in his chair, however, after he was convicted of all 30 counts. The courtroom fell silent when the clerk asked all 12 jurors to affirm their verdict and they responded “Yes.” Judge George O'Toole reminded jurors they are “still active an active jury” because the second phase of the trial, the penalty phase, will determine whether Tsarnaev lives or dies. The penalty phase will begin “early next week,” the judge said.

Karen Brassard, who said she was speaking for a group of bombing survivors and victims' family members, told reporters after the verdict that she was grateful that Tsarnaev was going to be kept off the streets, but said there can be no closure.

Brassard said she is well aware the ordeal isn't over, as the penalty phase is yet to come.

Twin blasts near the finish line of the April 2013 Boston Marathon killed three people and injured some 260 others. In a still image taken just before the explosion, Tsarnaev can be seen apparently dropping a backpack that prosecutors said contained a bomb in the middle of the crowd, just behind eight-year-old Martin Richard, who was killed in the blast. Tsarnaev also faced charges relating to the murder of MIT police officer Sean Collier three days later.