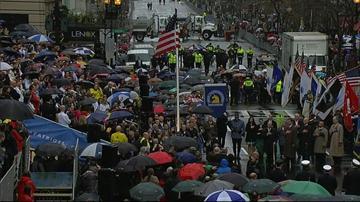 (CNN) -- As thousands gathered to mark the anniversary of a horror that shook the city, survivors and government leaders shared a unified message Tuesday: Boston is strong.

"We would never wish the devastation and pain we have experienced on any of you," said Patrick Downes, who was among the many injured in the twin bombings at last year's Boston Marathon. "However, we do wish that all of you, at some point in your lives, feel as loved as we have felt this last year. It has been the most humbling experience of our lives. We hope you feel all the emotion we feel when we say 'thank you.'"

Downes was a newlywed at the time of the attack. He and his wife, Jessica Kensky, each lost a leg.

Before the crowd gathered Tuesday at the Hynes Veterans Memorial Convention Center, he spoke of the three people killed in the blasts, and a university police officer killed days later amid efforts to catch the suspects. He called them "guardian angels."

"Let's show them they live on in our bonds of family, friendship and community and in the infectious spirit we will feel on the third Monday in April for years to come." That's the date of the marathon.

After a string of speakers, Vice President Joe Biden began his remarks by saying, "I've never witnessed a tribute like I heard today." To the survivors, he said, "my God, you have survived and you have soared. You are truly inspiring. I've never heard anything so beautiful as what all of you just said."

"So much has been taken from you but you never, never have given up," he said.

"You have become the face of America's resolve for the whole world to see," Biden said, adding that people all around the world know the pride, courage, and resolve of Bostonians. "That's why the twisted, cowardly terrorists who acted here and in other places do what they do. They try to instill fear so that we will jettison what we value the most and what the world most values about us: an open society, our system of justice, our freedom of religion; our access to opportunity, the free flow of information and ideas."

The terrorists "wanted to make America afraid so that maybe, maybe, we'd begin to change our ways. That's the objective -- the very soul of who we are. They figured if they instill enough fear, we will change. And it infuriates them that we refuse to bend, refuse to change, refuse to yield to fear.

"You are Boston strong. But America is strong... That's what makes us so proud of this city and this state. What makes me so proud to be an American is that we have never, ever yielded to fear. Never."

At the marathon, "the whole world witnessed ordinary citizens doing extraordinary things" to help each other, the vice president said.

"America will never, ever, ever stand down," he said. "We are Boston. We are America. We respond, we endure, we overcome and we own the finish line."

"Next week, we will run again," said Tom Grilk, executive director of the Boston Athletic Association. "But on this day, in this place, in remembrance and resolve, we gather as citizens of Boston, Boston strong."

One year ago, "the very fabric of this community was tested to its core," he said, but the city "inspired."

"You are strong at this broken place," former Mayor Tom Menino told the crowd, adding, "the heartbeat of Boston is a mighty force."

To those who lost loved ones and to the many who were wounded, Menino said, "whatever you have to do to recover and carry on, know that the people of Boston and I will be right there by your side." Menino was mayor at the time of the attack.

On April 15, 2013, the Patriots' Day bombings killed three people, including an 8-year-old boy, and wounded at least 264 others. The city then underwent days of fear as the two identified suspects, the Tsarnaev brothers, were on the run. Police say they killed a Massachusetts Institute of Technology police officer in the process, and then Tamerlan Tsarnaev was run over by his younger brother, Dzhokhar, as they battled police. Dzhokhar Tsarnaev has pleaded not guilty to 30 counts and is scheduled to go on trial in November.

Obama: Boston will show it 'chooses to run again'

"A year ago, tragedy struck at the 117th Boston Marathon," President Obama said in a written statement Tuesday. "Four innocent people were killed that week, and hundreds more were wounded. Today, we remember Krystle Campbell, Lingzi Lu, Martin Richard, and Sean Collier. And we send our thoughts and prayers to those still struggling to recover...

"One year later, we also stand in awe of the men and women who continue to inspire us -- learning to stand, walk, dance and run again. With each new step our country is moved by the resilience of a community and a city. And when the sun rises over Boylston Street next Monday -- Patriot's Day -- hundreds of thousands will come together to show the world the meaning of Boston Strong as a city chooses to run again."

David Yepez, a teen who was wounded in the attack, followed Downes at Tuesday's ceremony. He hailed the first responders, doctors and others who helped in the wake of the bombings. "Thank you for your love, compassion and generosity," Yepez said. "You have touched our hearts in a way that, many times, our gratitude could only be expressed through our tears of joy."

Adrianne Haslet-Davis, a dancer who lost her left foot in the attack, told the crowd, "If anyone is wondering what they can do, what you can do, I would answer: Look around. People in your community need your support. They need your patience and they need your time... Let April 15 be a day when we all work together to make this world a better place."

Massachusetts Gov. Deval Patrick said, "We share the same fears, the same hopes, the same community," he said. "We are, in the end, one community."

He added that he hopes "as we remember the dead and encourage the injured, that we remember community.... The power of love itself -- that's what community is."

A series of musical performances helped set a solemn but hopeful tone for the ceremony. The world-renowned Boston Pops orchestra performed, with singer Renese King singing both "America the Beautiful" and "For Good," a song from the musical "Wicked." The Boston Children's Chorus performed "Up to the Mountain."

After the ceremony, at 2:49 p.m. ET, the city will hold a moment of silence, followed by church bells tolling and a flag-raising ceremony.

A year after the bombings, families of the victims are struggling to come to terms with the loss.

"She had that special, I don't know what it is, that special thing about her," said Lillian Campbell, grandmother of bombing victim Krystle Campbell, 29. "And you felt happy around her because she was always laughing and bubbly. I loved her."

Some victims injured in the attack are showing their perseverance by planning to take part in this year's marathon, scheduled for Monday -- even victims who suffered severe injuries.

"Last year, I was on the ground at the finish line. This year, I'll be running across it," said Kevin White. "It kind of proves to people that evil isn't going to win." White, then 34, had shrapnel through his legs a year ago. His 71-year-old father, Bill, lost a leg.

Authorities have announced extensive security plans for this year's marathon, which is expected to bring in $176 million for the Boston area's economy.

Brothers Paul and J.P. Norden each lost a leg in the attack last year. On Tuesday, they began a trek: walking the entire 26.2-mile marathon route, along with family and good friends. "I feel so blessed," their mother, Liz, said in a Facebook post, adding that she couldn't be prouder.