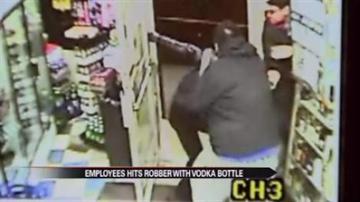 BOSTON — A bottle of vodka is being credited for thwarting a robbery at a gas station in Boston.

Surveillance video shows the would-be robber motioning as if he had a gun and demanding cash.

The clerk started to shovel money into a bag.

But that is when another employee attacked the robber with a bottle of vodka.

Moments later, the two employees forced the robber out the door.

Police were able to catch the suspect. He is now facing armed robbery charges.