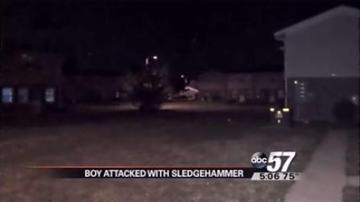 INDIANAPOLIS -- An eight-year old Indianapolis boy is fighting for his life after police say he got hit in the head with a sledgehammer.

Cops responded to an East Side neighborhood late Wednesday night.

Investigators are not sure what happened but neighbors told police there has been an ongoing dispute between two families at an apartment complex.

"It's possible it was domestic related.  The detective has been hard at work at this," said Sergeant Linda Jackson. "But it is a very active and ongoing investigation."

Medics also took a 12-year-old girl to the hospital with minor injuries.