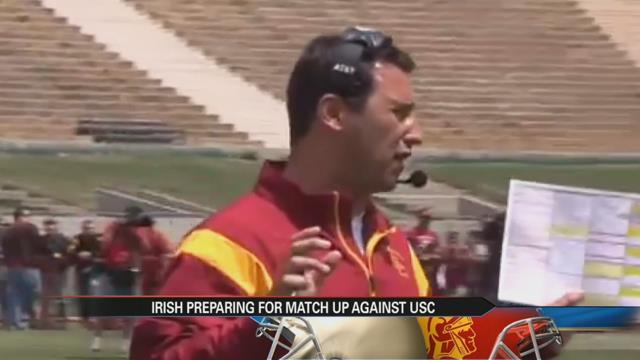 It has been a tumultuous few days at USC after the firing of head coach Steve Sarkesian. The former coach checked into a residential treatment facility after reports of alcohol use on the job. Now the team is left wondering about the future of the program, and who will lead it going forward.

When Notre Dame lines up Saturday night against USC, Brian Kelly will face the fourth different head coach for the Trojans in 4 years. And he's warning his Irish to be on guard for an inspired performance in light of that.

According to ESPN, on Sunday, Sarkesian violated a zero tolerance alcohol use policy when he showed up to meetings intoxicated.

Clay Helton will step in as the interim head coach.

"Once again, very fortunate to have a group of first class kids that are extremely talented and want to do something special here," said Helton.

This will be his second time acting as interim head coach for the Trojans. After Ed Orgeron departed in 20-13 he led the Trojans to a bowl win over Fresno State.

"Coach Helton obviously being put in the role of head coach is somebody I have a lot of respect for," said Notre Dame Head Coach Brian Kelly. "He's been in this role before. Does a great job as an offensive coordinator."

Coach Kelly says he expects the team to galvanize around their new leader. Meaning a more inspired USC team coming to South Bend.

"You know Texas responded this week after a lot of media scrutiny," said Coach Kelly. "I expect USC to respond the same way. So we are going to have to play extremely well."

Coach Kelly also shot down speculation about taking on the USC coaching vacancy.

"What we do here is we avoid the noise," said Coach Kelly. "And that would be considered a lot of noise."