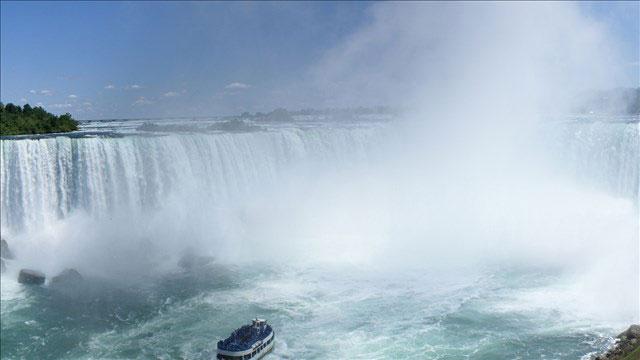 But waterfalls are no friend to bridges -- and that may require one of Niagara's fabled falls to be shut off for a time.

A proposal to replace two 115-year-old bridges connecting the U.S. mainland with Goat Island -- a green space located between American Falls and Bridal Veil Falls -- may require shutting down the American Falls, according to an assessment from New York State's park and transportation agencies (PDF).

About 85% of the Niagara River flows over Horseshoe Falls -- on the Canadian side of the border -- while the rest goes over over American Falls. To "dewater" the American Falls, officials would build a temporary cofferdam that would redirect the entire river flow to Horseshoe Falls.

"Dewatering is necessary for two reasons," the report says. "The existing 115-year old bridges need to be demolished. The river channel must be dewatered in order to demolish and remove the bridges.

"(And) the piers and abutments for the replacement bridges must be constructed 'in the dry,' to allow for safe construction procedures and to ensure that the new foundations are firmly anchored to bedrock."

CNN affiliate WKBW says it could take as long as nine months to build the new bridges.

Locals have mixed feelings about the possibility.

"The American side really needs updating compared to the Canadian side," said Valerie Beach. "I think the updated stone walkway and new stuff will ultimately boost the economy."

John Percy, CEO of the Niagara Tourism & Convention Corporation, told CNN that the dewatering is "an exciting -- even an enormous -- marketing opportunity for us."

Viewing the dry falls "could be a once-in-a-lifetime opportunity for many people," he said. Plus it's not like the whole Niagara Falls will be shut down; while the American Falls may be dewatered, Canada's Horseshoe Falls will be at full gush.

For some, Percy added, it could be a twice-in-a-lifetime situation, as the falls was also dewatered in 1969. Back then, the Army Corps of Engineers "closed off flow through the channel in order to analyze the stability of the American Falls," the report said.

The novelty of the falls -- the subject of Native American legends and an attraction for hundreds of years -- being shut off was its own tourist attraction, though at least one observer said the waterless falls wasn't an impressive sight.

"I remember being a little disappointed because the scene was just a desolate landscape of rock, debris, tree limbs and construction equipment," Robert Borgatti, then a resident of Niagara Falls, New York, told the Buffalo News.

There's concern that an empty falls could hurt tourism this time around. The Niagara Falls area attracts more than 20 million tourists a year.

"Dewatering is expected initially be a tourism draw (a once-in-a-lifetime opportunity to see the falls and river channel without water), but after some period of time could negatively impact park attendance, particularly during the summer tourist season," said the state report.

But Percy believes that with the right planning, the waterless falls could create an uptick in tourism.

Either way, it's early yet. A parks department spokesperson told WKBW that there's no funding yet for the project and the report is simply part of the planning process. Completion of the project, if it goes forward, could be several years away.

Residents and interested parties will get their say on Wednesday, when a public hearing is scheduled in the town of Niagara Falls, New York.

In other words, when it comes to dewatering the falls, they'll cross that bridge when they come to it.