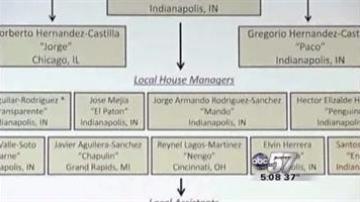 Gregorio Hernandez Castilla was sentenced to 41 months in prison. His two brothers were previously sentenced on similar charges.

The U.S. Attorney's Office said the ring smuggled women into the country from Mexico and Central America, then forced them into prostitution to pay for the trip.

The women were moved through Indiana, Illinois, Michigan and Ohio.

At least 12 more people have been charged in connection to the operation.