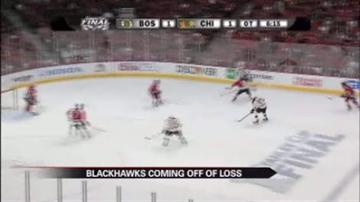 CHICAGO — The Chicago Blackhawks are coming off their loss to the Boston Bruins Saturday night. That game was game two of the Stanley Cup playoffs.

The game in Chicago went into overtime. The Bruins scored the game-winning goal and beat the Blackhawks 2-1.

The teams will face off Monday in Boston.