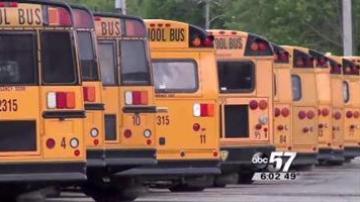 ELKHART, Ind. — On the first day of classes, students in Elkhart will be able to see the juggling act the district has had to undertake this year due to budget cuts.

"Getting the high schools students out of the house in the morning is going to be important, they're used to sleeping in just a little more," said Shawn Hannon, director of communications for Elkhart Community Schools.

On the other end of the spectrum, elementary students are starting their day later.

And some students will even be changing schools.

Other changes coming to elementary schools this year addresses the longer day the students will have and the fact that they'll be getting out of class at 4 p.m.

"All of our elementary students in grades kindergarten through sixth grade will have a snack through a a federally supported program," said Hannon.

These changes may seem like a lot to tackle all at once but the district is sure parents and students will be ready.

"We had it all in place by May and then spent the summer really trying to communicate with parents to make sure everybody knows where they're supposed to be when and we're looking forward to a great morning this morning," said Hannon.

The district sent out information on new bus routes and bus stop times.

But if you have misplaced that letter you can contact the transportation department at 262-5695.