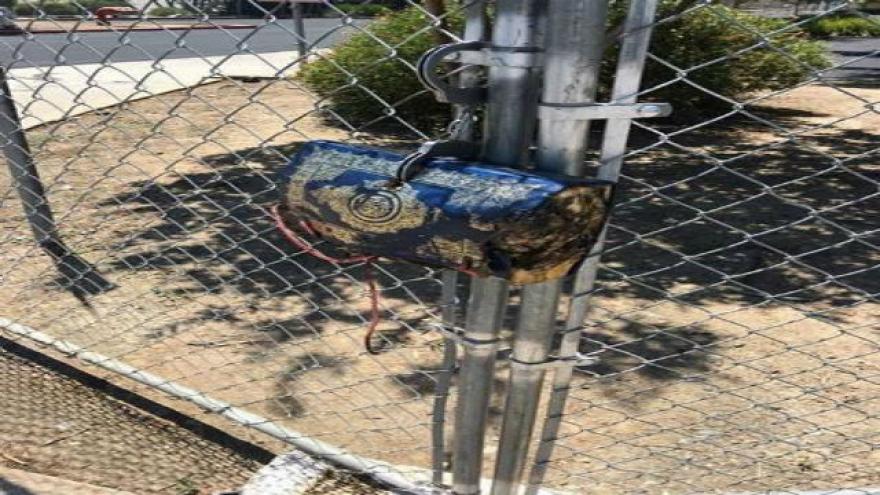 A burned Quran filled with bacon was found outside a Sacramento mosque Saturday. Photo courtesy CAIR

By Nicole Chavez and Joe Sutton

A burned Quran filled with bacon was found outside a Sacramento mosque Saturday, the Sacramento County Sheriff's Department said. It was hanging by a handcuff from a temporary fence outside the Masjid Annur Islamic Center.

"Sheriff's Hate Crime detectives were called to the scene to begin their investigation into the possible hate crime," the department said in a statement.

The center, which is the largest mosque in the greater Sacramento area, is next to a police station but it has been targeted in the past.

Another center was targeted about 20 miles west in Davis, California.

As Ramadan Taraweeh prayers were underway Friday, an individual dropped a "large quantity" of cut up pages of the Quran outside the Islamic Center of Davis, Sgt. Dan Powell with the Davis Police Department said.

"There is no video of any suspects or video of the incident occurring; but we are calling this a hate incident," he said.

It's not the first time the center was attacked or vandalized. In January, police said 30-year-old Lauren Kirk-Coehlo broke windows, damaged property and placed bacon on door handles at the Davis center. She was sentenced to five years' probation on June 15 after pleading guilty to a felony hate crime, CNN affiliate KVOR reported.

The Sacramento chapter of the Council on American-Islamic Relations called both incidents "apparent acts of intimidation" and thanked law enforcement for their response.

"Decisive action by law enforcement authorities sends a strong message of deterrence to anyone who contemplates turning their bigoted views into acts of intimidation," said Basim Elkarra, the group's executive director.