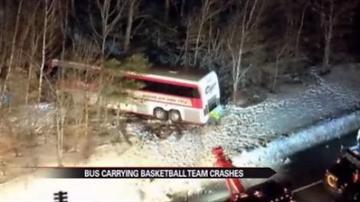 A bus carrying the University of Maine women's basketball team ran off the highway.

The team was on its way to Boston University when the 55-year-old driver passed out behind the wheel.

"Any other track that bus would have went on could have caused fatalities, not only for us but for oncoming traffic, so the bus whether it was God, fate, whatever, steered itself to the safest place possible," said Richard Barron, head coach.

"I always known that my teammates had my back and that just reinforces it, that in a life or death situation my teammates will always be there for me," said Liz Wood, player.

The driver was listed in serious condition and the only other injury was the head coach who suffered a few cuts from the shattered glass.