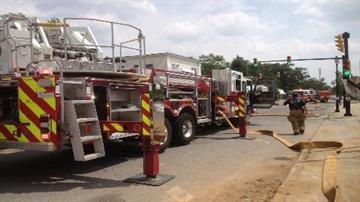 SOUTH BEND, Ind. - A business and several apartments were damaged Monday afternoon after a fire started.

Neighbors noticed smoke coming from the printing and copying center at 1520 South Miami Street around 2 p.m.

ABC 57's Jessie McDonough, on the scene, was told that one person was inside the apartments at the time. No injuries have been reported.

Extra fire crews were called in to help with the fire due to the extreme heat.

It took firefighters about 15 minutes to get the fire out.

Several roads were blocked off while emergency crews worked. Firefighters remain on the scene putting out hot spots.

It's unclear if those who live in the apartments were displaced.