Business as usual for Notre Dame this weekend 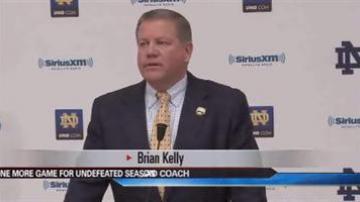 SOUTH BEND, Ind. -- This weekend Notre Dame heads to the west coast for its final match-up of the regular season against long-time rival USC. Notre Dame Head Coach Brian Kelly talked about the weekend’s matchup and staying focused for the final stretch of the season.

Coach Brian Kelly says this can't be called a rivalry game because in the last 10 years, Notre Dame has only beaten the Trojans once, but there is a ticket to the national championship game on the line.

After last weekend's dominant performance over Wake Forest and with only a seemingly weak Trojan team remaining, some have already tied up the 2012 season.

But as Notre Dame’s Head Coach Brian Kelly will tell you, it's far from over.

"That’s why you play the games. You know it's a long season. It's college football. It's 18-20 year olds. There's so many factors that go into this,” said Kelly.

A big factor is the Trojan offense.

USC's starting quarterback Matt Barkley is likely out with a shoulder injury and redshirt freshman Max Wittek is expected to play against the Irish instead-- giving Notre Dame an unknown challenge to overcome.

Which means Wittek will likely be aiming for sophomore wide receiver Marqise Lee. Lee currently leads the nation this season with a total 107 receptions and more than 1600 receiving yards.

"So one, his athletic ability and his skill set after the catch and two they've done a great job at putting him in the position to make those big chunk plays,” said Kelly.

With offensive weapons in the receiving core and a quick physical defense, Saturday's game at the coliseum is far from a walk in the park-- for the Irish it’s a weekend at the office.

“We get the absolute best from our opponents each and every week so for us it's business as usual,” said Kelly.

Coach Kelly says the team will not be changing anything on defense to adjust to Max Wittek. They'll continue to play their own game on defense- something that seems to have worked out pretty well for them so far this season.