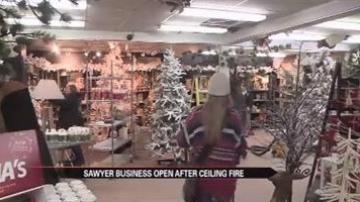 Firefighters responded to Sawyer Home and Garden Center just before 11 a.m. for an electrical fire in the ceiling of the store’s main showcase room.

"We've got people coming from Indiana, Illinois, just for our goods. They just love the place,” said employee Therese Sisamis.

"It's just really gets you into the spirit,” said Sharon Buck of South Bend.

"Everyone talks about it in the community,” said Shannon Heigle.

The smells at Sawyer Home and Garden tend to fill the air.

"All the different scents of greenery,” said Buck.

"You had the Yankee Candle area  and then you got a little further back and it smelled like fresh earth stuff,” said Heigle.

But Wednesday one smell the employees were working hard to get rid of was the smell of an electrical fire that was sparked in the store’s main entrance room.

"We heard the zapping and the owner Barry came out with a fire extinguisher and started using that and then you could see the flames. So we got everyone out that was in and called the fire department,” said Sisamis.

"We had total about 25 firefighters on scene,” said Chief Mike Davidson of the Chikaming Township Fire Department. "This was an interior attack. We pulled ceilings right away, and we were able to use a minimal amount of water to put the fire out."

"We had customers and they didn't want to leave- in fact they were asking if they could come in and buy,” said Sisamis.

In a matter of minutes, the employees were back inside dusting off the merchandise and sweeping up the debris.

The customers inside later in the day had no clue there was a fire.

"I just thought it was kind of odd they were vacuuming while we were here,” said Buck.

"I'm very proud of them, they did a very good job,” said Davidson.

They saved the day for the store and its shoppers.

"That would have been really disappointing if we would have gotten here and they were closed,” said Buck.

The fire chief believes the fire was electrical in nature, but the investigation is ongoing.