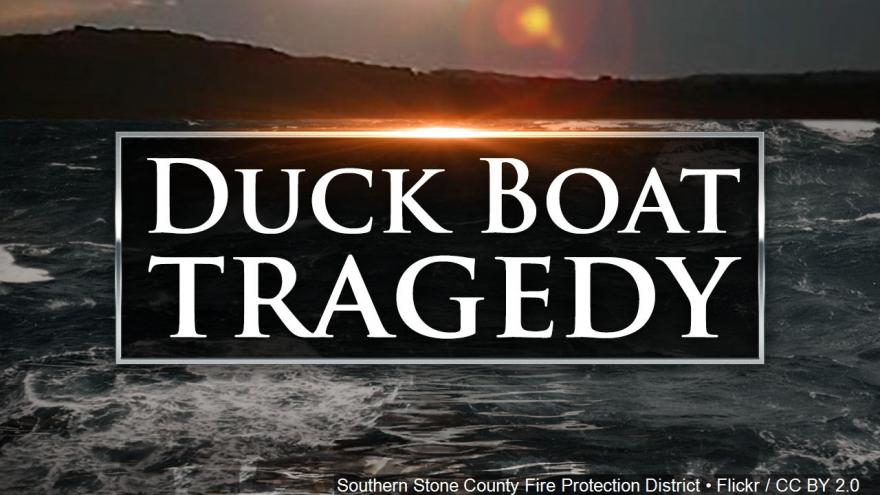 KANSAS CITY, Mo. (AP) — The company that owns a duck boat that sank on a Missouri lake in the summer, killing 17 people, has settled the first of several lawsuits filed in the accident.

William Bright, 65, and his 63-year-old wife, Janice, of Higginsville, Missouri, were among those killed in the July 19 accident on Table Rock Lake. Their three adult daughters filed suit soon after.

Adam Graves, an attorney for the family, told the Kansas City Star that the settlement with Ripley Entertainment was finalized Thursday, and that his clients were satisfied with the settlement.

"One of the first things Ripley said when they came into mediation was, 'We are a family company, and we value family,'" he said.

Three others named in the suit will remain defendants. They are Ride the Ducks International LLC, a division of Ripley; the captain of the duck boat, Kenneth Scott McKee; and the driver on land, Robert Williams, who died when the boat sank.

The amphibious boat known as Stretch Duck 07 went down amid turbulent waters as a strong storm hit the Branson area. The duck boat tours begin on land with a tour of the town known for its country music shows before a short excursion on Table Rock Lake.

A federal grand jury this month indicted McKee. He is accused of several violations of federal law overseeing boat captains, including not properly assessing incoming weather before taking the boat out on water, failing to tell passengers to use flotation devices, and other violations. The federal investigation is ongoing.

The Brights were visiting Branson for their 45th wedding anniversary. The lawsuit said the company and operators of the boat had warning that a storm was approaching when the boat entered the lake at 6:55 p.m., about 20 minutes after the National Weather Service had issued a severe storm warning for the Branson area

The lawsuit is among several filed over the accident. Nine of the victims were from one Indianapolis family. In addition to the Brights and Williams, other victims included a couple from the St. Louis area, an Illinois woman who was taking her granddaughter on a trip to Branson, and a father and son from Arkansas.

Seven others were injured.