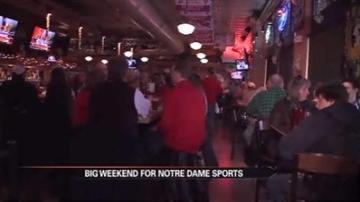 With all these fans out and about, the ones really making out were South Bend businesses.

Businesses in South Bend benefitted from all the Irish excitement.

“We are currently on a 20 minute wait but once the basketball game starts, we will be on an hour wait," said Brother's Bar and Grill Manager Adam Schmidt.

Fans from both the Fighting Irish and the Louisville Cardinals were at Brother's Bar and Mulligans to gear up for the big game.

While the Cards were hopeful the luck of the Irish would run out, Notre Dame fans say not only will the Men's basketball team pull out a win, they also think those ferocious fighting Irish hockey players are going to take down their big rival, Michigan, for a double Notre Dame victory.

“We haven’t won at Notre Dame since 1994," said Tony Fortwengler.

“It’s going to be a double win for the irish," said Todd Corl.