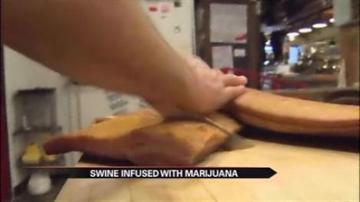 SEATTLE -- A butcher in Seattle has found a way to infuse his pork with marijuana.

He said you can call it "smoked" pork, ham and bacon because the pig was fed pot.

He cannot remember how he came up with the idea but says it does not have the effect some are looking for.

The butcher described the taste of the pigs as more savory than usual.