Cabs rake in the green for Notre Dame vs. Michigan game 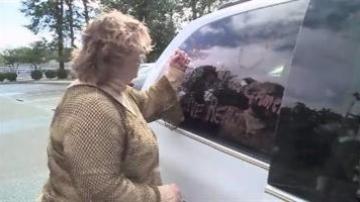 SOUTH BEND, Ind. – The city of South Bend was packed Saturday with domers and the few Michigan fans that were brave enough to step foot in Irish Country.

With bumper-to-bumper traffic and no parking for miles from Notre Dame’s campus, it was pretty hard to get around.

But that meant big business for cab companies across the city.  ABC57’s Jessie McDonough went on an exclusive ride along with Golden Dome Cab Company.

Golden Dome driver Pam Sobih, or Goldie as her customers like to call her, said the cab business in South Bend has been lacking a little lately.

“Business has fallen off and it has really went down here,” said Sobih.

So Goldie has been rushing around all day picking up customers trying to much as much green as possible from the Notre Dame vs. Michigan game.

“People flag us down that need a ride,” said Goldie.

One of the people flagging down Goldie today was 12-year-old Jack Kling and his mom.

Kling and his mom had a vehicle to take to the game, but they opted to take a cab instead, because they could get dropped off closer to the stadium, which is a huge benefit to Kling who has leukemia.

“I got diagnosed on Christmas Day.  It is a little harder for me to walk, so I am taking this cab which gets us a lot closer than we expected, past the Notre Dame library,” said Kling.

Goldie had to maneuver through the ever-changing traffic patterns to get Kling to the game.

“The drawback is you do not know the configurations the police have,” said Kling.

But she did manage to get Kling right up to the school library for his pregame tailgate party.

It was not just about making a buck for her today, she let the 12-year-old ride for free, which was almost as cool for him as going to the Notre Dame game.