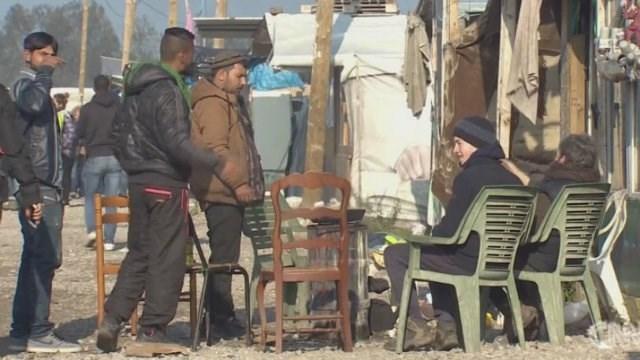 CALAIS, France (CNN) -- French authorities began clearing the "Jungle" refugee camp on Monday, busing out more than 2,000 people by the afternoon as the country readies to raze the patch of wasteland where thousands have made temporary homes.

An old hangar in the port city of Calais was converted into a processing center for between 6,000 and 10,000 migrants. Authorities offered them two choices -- stay in France or go back to their country of origin.

• There are still 5,000 to 6,000 people living in the camp, Calais Mayor Natacha Bouchart told CNN affiliate BFMTV on Monday evening

• Authorities will begin dismantling the camp on Tuesday, officials said

• Unaccompanied minors and vulnerable youth could be settled in Britain

• Processing is expected to take up to a week

As the time to dismantle neared, groups of people threw stones at authorities and police responded with tear gas.

There were small fires on the camp's outskirts, and a group tried to tip a portable toilet into one of them

A road to Britain

Nicknamed "the Jungle," the camp is a grim mosaic of squalid tents, makeshift shelters and tumbledown caravans at the side of a motorway that has become the wretched symbol of Europe's refugee crisis.

Migrants have flocked to Europe by the millions, many from war-torn Syria and African nations. The majority at the camp are from Afghanistan, Eritrea and Sudan.

Some migrants have refused to leave the camp, which sits at one end of the Eurotunnel -- a direct undersea route to Britain that many have risked their lives trying to traverse by hiding in lorries. Some have even walked the 30 miles.

In 2015, the Eurotunnel operator intercepted 37,000 migrants attempting to travel to the UK illegally.

Britain is a preferred destination for many migrants because its economy is doing better than most of its European counterparts, unemployment rates are low and a lot of migrants have at least a basic command of English.

Wahid, a 20-year-old from Jalabad in Afghanistan, tried everything to get to Britain, passing through Iran, Turkey, Greece, Italy before reaching France. He has lived in the Jungle for eight months.

"I hoped to go to England, but I've lost my chance. For three months I tried hiding in trucks in the parking (lots), but every time they found me by scanners. They said 'Sorry, no chance, go back to the Jungle," he told CNN.

"I'm a little bit sad that we lose the chance to go to the UK, but I'm happy that the Jungle is to close -- it's a very sad place, a very boring place and we've been living like animals."

Alfodil, a 23-year-old from Sudan, has been living in the Jungle for two months after almost two years stuck in Libya, from where he took the treacherous journey across the Mediterranean "on a small ship, so dangerous" to reach Europe.

"I want to go to the UK if possible, because I like English. I learned English at school, and I wanted to go to high school or college in Edinburgh or London," he said.

Several migrants appear to have been given wristbands that determine where they will be taken. But many with these bands, including Alfodil, did not seem to know where they were going.

At the processing center -- in the middle of an industrial zone -- migrants are being asked to join one of four lines: lone migrants, families, those considered "at risk" (elderly, ill or disabled people, and pregnant women) and unaccompanied minors.

Authorities are trying to spread the migrants out across the whole country. When migrants register at the processing center, they can choose between two regions presented to them for resettlement. When quotas for those regions are reached, authorities open up other areas and accept a number of migrants for places there. Buses headed to at least seven different regions on Monday.

Their instructions were laid out in a leaflet distributed by volunteers on Sunday evening.

"Everybody living in the Calais jungle will have to leave in order to be sheltered in one of the French reception and counseling centers," the letter reads.
"You will receive help and the necessary information on the procedures that you will need to follow if you have applied or wish to apply for asylum," it adds.

Late Sunday night, riot police were out in force, and some 1,250 police were called in to prevent crowd control problems on Monday. Clashes between migrants and police erupted Saturday night at the camp.

Migrants will 'not be forced'

Since the early hours of Monday, thousands of migrants made their way in groups to the center, packing whatever they had left in wheeled suitcases, backpacks and blue-and-white striped laundry bags, ready to head to their new lives. One even carried a cricket bat and plastic wickets as he joined the long queue.

Unaccompanied minors are the ones with the best chance of reaching Britain. They are being interviewed by French and British authorities to determine if they should be rehomed in the UK, under an agreement offering refuge to children and vulnerable young people. They are being kept in a temporary shelter at the camp until a decision is made in their case.

French Interior Ministry spokesman Pierre-Henry Brandet says migrants will not be forced to get on board buses departing Calais: "This will be done on a voluntary basis and no coercive measures will be taken towards the migrants."

Awad, a 31-year-old from Sudan told CNN: "I tried to get to the UK because I love the United Kingdom," as he queued in the darkness before sunrise.

But he is happy to stay in France if he can -- in the south if possible, where it's warm -- and he is glad to leave the Jungle to "see real life."

But he is still nervous.

"I don't know what will happen, but I hope it will be good."